The World Economic Outlook, Implications for Kuwait and the Region 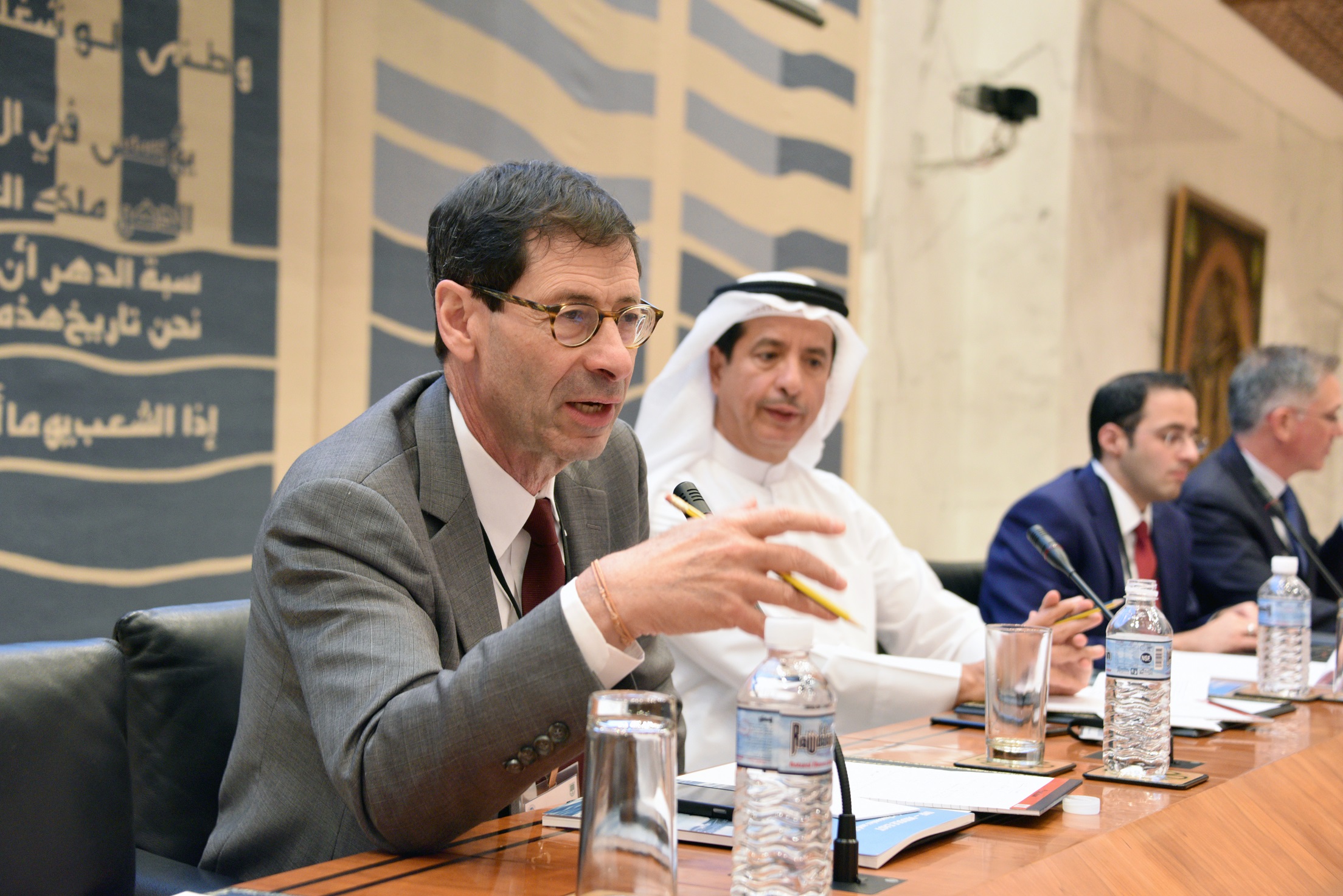 The IMF Middle East Center for Economics and Finance in Kuwait, jointly with the Arab Fund for Economic and Social Development, held a high-level symposium that discussed the world economic outlook and its implications for Kuwait and the region.

The IMF Middle East Center for Economics and Finance (CEF) in Kuwait, jointly with the Arab Fund for Economic and Social Development (AFESD), held a high-level symposium on “The World Economic Outlook, Implications for Kuwait and the Region” on Monday November 12, 2018. The event was hosted at the Arab Fund’s Headquarters. The panel discussion was chaired and moderated by His Excellency Dr. Yousef Al-Ebraheem, Economic Advisor at Al-Diwan Al-Amiri. It included, as the keynote speaker, Professor Maurice Obstfeld, the IMF’s Economic Counsellor and Research Department Director, and as discussants Professor Kamiar Mohaddes of Cambridge University, and Dr. Christopher Payne, Economic Advisor to the Governor at the Dubai International Financial Center.

During his introductory remarks and the subsequent discussion, His Excellency Dr. Yousef Al-Ebraheem indicated that the symposium was the ninth high-level forum organized by the CEF jointly with the AFESD, aimed at stimulating an open debate on the evolving economic challenges faced by policymakers in Kuwait and the wider Arab community. He discussed recent global economic developments, and overviewed the key reforms necessary to better prepare the Arab world tackle the resulting challenges, taking into consideration conflicts, the refugee crisis, high unemployment especially among the youth, uncertain prospects for private sector growth, and volatile oil prices.

In his presentation and subsequent discussion with the audience, Professor Maurice Obstfeld projected that the global economic expansion remains broadly solid for the moment but has become less balanced and may have plateaued in major economies. Global growth, for 2018 and 2019, which the IMF had projected at 3.9 percent earlier this year, is now projected at 3.7 percent for both years. Downward revisions are mainly due to outlook deterioration in some emerging market (EM) economies, after a weaker early 2018 outturn in several advanced economies (AEs). Financial market conditions have differentially tightened for emerging and developing economies, he said, in a setting of high policy uncertainty – especially on trade and monetary policies. Beyond the short-run prospects, medium-term global growth will fall (due to lower potential growth, unwinding of procyclical US fiscal stimulus).

Professor Obstfeld documented that EM spreads have widened, and currencies generally depreciated, while capital inflows have shrunk, especially for countries with weaker fundamentals. Past favorable financial conditions have left a legacy of higher corporate and sovereign debt exposures worldwide, but EMs might be especially vulnerable, given the present confluence of pressures, to global shocks – these could come from trade actions, slowdown in China, unexpected financial tightening in AEs, tensions within the European Union, and adverse geopolitical events.

Reflecting geopolitical concerns (including the U.S. secondary sanctions relating to Iran) and supply failures (for example, in Venezuela), oil prices have risen this year despite some softening more recently. This development has helped lift the current and projected growth in GCC countries. For Kuwait in particular, a period of faster growth provides an opportunity to accelerate key fiscal and structural reforms, Professor Obstfeld said.

He commented that there are abundant avenues to enhance the global trading system to produce higher growth for all countries. One important opportunity is in services trade. Global GDP could be raised substantially through reductions in trade barriers, including behind-the-border barriers. Unfortunately, the political climate may not be so favorable for further trade liberalization, despite the gains it offers. While the recent Pew survey shows that citizens throughout the world broadly favor trade (with even an uptick in sentiment since 2014), AE respondents, in particular, remain skeptical that trade generates jobs and wage growth. This may reflect slower growth in AEs, together with the stagnation of incomes at the lower reaches of the income distribution.

Professor Obstfeld pointed out that should current risks lead to a sharp slowdown, policymakers have less monetary and fiscal policy space to act compared with ten years ago. The lack of monetary space is especially concerning for AEs, where core inflation rates as well as nominal interest rates generally remain low. This concern highlights the need to energetically undertake structural reforms, enhance financial stability frameworks, and rebuild fiscal buffers. Research for OECD economies shows, he said, that policy responses to crises are more effective when initial public debt levels are lower. A key requirement for a healthy global economy, according to Professor Obstfeld, is to enhance multilateral collaboration among countries – on trade, financial stability, international taxation, refugees, and climate, among other areas of common concern.

Following Professor Obstfeld’s presentation, Professor Mohaddes and Dr. Payne presented a complementary analysis of the reforms needed in Kuwait and the region to address the challenges and opportunities presented by the world economic outlook, discussing lessons from other countries’ experiences in the Middle East and other regions. The floor was then open for discussion with the audience, whose interventions reflected a broad range of interests, including participants from the public sector, the banking and business community, academia, as well as representatives from international organizations.

Please follow the below links to watch full recordings of the symposium: